A BREAKTHROUGH EARLY IN THE YEAR : PORSCHE INDONESIA OFFICIALLY INTRODUCES THE NEW 718 CAYMAN AND PANAMERA

A BREAKTHROUGH EARLY IN THE YEAR : PORSCHE INDONESIA OFFICIALLY INTRODUCES THE NEW 718 CAYMAN AND PANAMERA 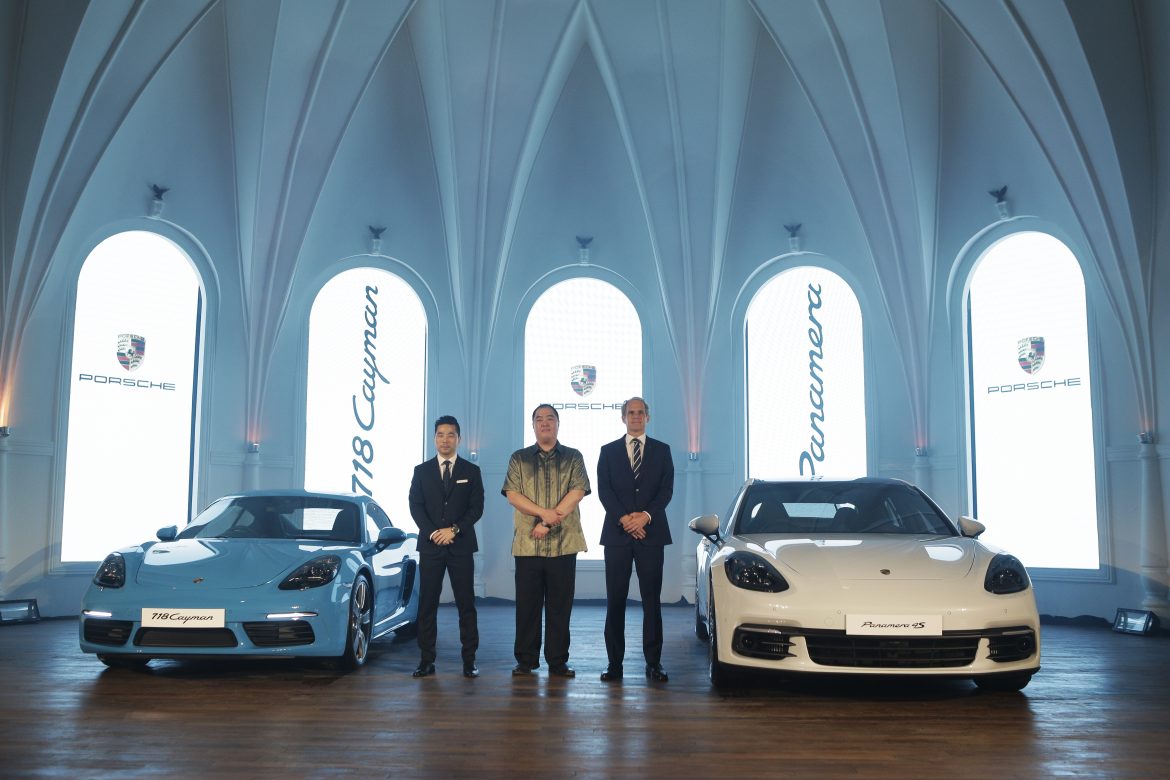 Jakarta, 27 February 2017 – PT Eurokars Artha Utama, part of Eurokars Group and the official importer and distributor of Porsche in Indonesia, launched the new 718 Cayman and Panamera on 27 February 2017 in a thrilling event that was held at The Pallas in Jakarta and witnessed by the media, VIPs and Porsche enthusiasts.

The new mid-engined 718 Cayman epitomizes the balance between a high performance sports car which is also efficient at the same time, thanks to all-new four-cylinder flat engines. Assisted by a turbocharger with Variable Turbine Geometry (VTG), a technology hitherto used exclusively in the 911 Turbo, the 718 Cayman S delivers 350 hp. The 718 Cayman is similarly turbocharged, delivering an impressive 300 hp. Both models have NEDC fuel consumption of 6.9 to 8.1 litres per 100 kilometres. The latest generation of Porsche Communication Management (PCM) is available as a standard feature while the Apple Car Play and the High-End Burmester Surround Sound System are optional.

At the same event, Porsche Indonesia also presented its new four doors sports saloon, the new Panamera. Born from courage, it reconciles two contrasting characteristics more than ever before: the performance of a genuine sports car and the comfort of a luxury saloon. Its engines and transmissions have been redesigned, its chassis perfected, and its display and control concept reinterpreted for the future, with key features such as the Porsche Advanced Cockpit, an active roll compensation, rear axle steering and three-chamber air suspension.

Christoph Choi, Managing Director of Porsche Indonesia, said: ”We are delighted to introduce two very exciting models to Indonesia, the new 718 Cayman and the new Panamera. Both models deliver what the Porsche core values stand for – tradition and innovation, performance and day to day usability. With the new down-sized engines, both models fit perfectly into the Indonesian tax structure, therefore we guarantee that every customer gets more for less!”

The same new four-cylinder flat engines with turbocharging as in the 718 Boxster are being deployed in the 718 Cayman. As a result, the coupé and the roadster have an identical engine output for the first time. The entry-level version starts with 220 kW (300 hp) from two litres of displacement. The S model delivers 257 kW (350 hp) with a displacement of 2.5 litres. This represents 18 kW (25 hp) more power compared to the predecessor models with an NEDC fuel consumption of 8.1 to 6.9 litres per 100 kilometres.

In terms of their driving dynamics, the new 718 Cayman models follow in the tracks of the classic 718 cars. Thanks to their outstanding agility, the historic mid-engine sports cars won numerous races in the 1950s and 1960s such as the Targa Florio and Le Mans. Lateral rigidity and wheel tracking have been improved in the completely retuned chassis of the 718 Cayman; springs and stabilisers have been designed to be firmer and the tuning of the shock absorbers has been revised. The steering, which has been configured to be ten per cent more direct, enhances agility and driving fun. The rear wheels, which are one-half of an inch wider, in combination with the redeveloped tyres result in an increased lateral force potential and hence in greater cornering stability.

Driving dynamics options such as the Sport Chrono Package and Porsche Torque Vectoring (PTV) allow the sporty character of the 718 Cayman to be further customised. Another available option is PASM with a ten-millimetre lowering of the ride height and additionally in the S model PASM sport suspension with a 20-millimetre lowering of the ride height for the first time. As in the other Porsche sports cars, the Sport Chrono Package can be adjusted via the programme switch on the steering wheel. Supplementing the previous settings of “Normal”, “Sport” and “Sport Plus” is the “Individual” programme, which is able to call up previously programmed individual settings for various systems.

On account of the car’s greater driving performance capabilities, stronger brake systems are now in use with 330-millimetre brake discs in front and 299-millimetre discs at the rear. The 718 Cayman now has the brake system that was previously used in the Cayman S. The 718 Cayman S, on the other hand, uses the four-piston callipers of the 911 Carrera combined with six-millimetre thicker brake discs.

The new 718 Cayman has been further developed as comprehensively in its design as in its technology. The taut proportions, prominent air intakes at the front and sides and low side profile underscore the boost in dynamics. The nose has a much sharper profile, which gives the front end a wider and more masculine appearance. The ultra-slim front lights above the air intakes, which contain the parking lights and indicators, further reinforce this impression. Rounding off the front end of the 718 Cayman are the significantly larger cooling air intakes and bi-xenon headlights in their new design with integrated LED daytime running lights. LED headlights with four-point daytime running lights are available as a new option. Viewed from the side, the new sport coupé reveals its striking wings and side sills. The redesigned rear has a much wider look due to the accent strip in high-gloss black with integrated Porsche badge between the tail lights. The tail lights have been completely redesigned and are distinguished by the three-dimensional technology and four brake spots that appear to float freely.

Redesigned interior and PCM as standard

Inside, revisions are visible for both the 718 Cayman and the 718 Boxster. The upper part of the dash panel including air vents is new. The new sport steering wheel in the 918 Spyder design as well as the extensive connectivity options have now been added to the 718 cockpit along with the Porsche Communication Management (PCM) as a standard feature. Mobile phone preparation, audio interfaces and the 150-watt Sound Package Plus are all part of this standard. Options are available to extend the PCM.

About the Porsche Panamera

The Panamera was developed for sports car drivers who appreciate four doors and four seats. And for saloon drivers who prefer sporty handling. Opposites which the Panamera reconciles in superior style. It is a sports car and luxury saloon in one – Gran Turismo rethought and realigned. The second generation Panamera is the performance icon of the luxury class.

To accomplish this, Porsche has systematically improved the Panamera concept – with a four-door car that has been redesigned and restyled down to the last detail. Its engines and transmissions have been re-engineered, its chassis perfected, and its display and control concept reinterpreted for the future with multi-touch gesture control. The new Panamera once again extends the boundaries between an ambitious sports car and a comfortable cruising car with technical highlights such as rear axle steering, electromechanical roll stabilisation and a three-chamber air suspension.

911 design language with a much more dynamic flyline

Visually, the unique concept of the Gran Turismo is reflected in a new expressive design: unmistakably a Panamera, unmistakably a sports car – with long, dynamic proportions, pronounced shoulders, athletic flanks and a very dynamic roof line that is 20 mm lower at the rear. This “flyline” that is typical of Porsche cars forges a stylistic link to the 911 design icon.

A Porsche has always impressed with more than just power; its efficiency is equally important. To make the new Panamera even more efficient, all of the second generation engines have been redesigned. The engines were made more powerful while improving their fuel economy and reducing emissions. One new twin-turbo direct injection engine is being introduced at the local market launch: the Panamera 4S. The model is equipped with a permanent, fully variable all-wheel drive system (Porsche Traction Management / PTM) and a new eight-speed Porsche dual-clutch transmission (PDK). A V6 petrol engine which delivers 324 kW (440 hp) powers the Panamera 4S.

On the race circuit in a made-to-measure suit

The chassis combines the ride comfort of a luxury saloon and the performance of a genuine sports car. This is enabled by a perfectly tuned suspension concept, innovative mechatronic systems such as an adaptive air suspension with new three-chamber technology and electronic damper control (Porsche Active Suspension Management PASM), the further developed Porsche Dynamic Chassis Control Sport (PDCC Sport) system including Porsche Torque Vectoring Plus (PTV Plus) and a new electromechanical steering system. The integrated Porsche 4D Chassis Control system analyses the current driving condition in real time and enables optimised and coordinated use of all systems for even better handling. Porsche is also taking the steering precision and handling of sports cars into the class of Gran Turismo cars with the new rear axle steering – inspired by the 918 Spyder and 911 Turbo. The boosted driving performance is handled by a higher-performance brake system.

Digitalisation of the automobile is changing mobility more intensively and faster than ever. New display and control concepts, more intelligent assistance systems and continually faster and more powerful on-board electronics are leading to new levels of comfort, convenience, connectivity with the outside world and safety. The new Panamera is a reflection of this trend; it is by far the most digitalised and networked model in the Porsche model range. The electronics do not, however, filter out the driving experience. Porsche has made use of today’s digitalisation capabilities to bring maximum convenience into harmony with maximum driving dynamics and intuitive operation.

Plenty of functionality and easy interaction in the Porsche Advanced Cockpit

The typical Porsche interior has been reinterpreted in a future-oriented way for the new Panamera. Black panel surfaces and interactive displays combine the clear visuality and intuitive user interfaces of smart phones and tablets with the practical requirements for controlling the car. Classic hard keys and conventional instruments have been reduced significantly. In their place, touch sensitive panels and individually configurable displays dominate in the new Porsche Advanced Cockpit – with great benefits for the driver and the front and rear passengers. Despite a significantly extended range of communication, convenience and assistance systems, the different functions can now be used and operated more clearly and intuitively. The Porsche Advanced Cockpit transfers proven solutions of the analogue world into the digital present of mobility.

The Panamera is equipped with many standard and optional assistance systems, which make life while driving more convenient and safer. The key new systems include Night Vision Assist. It utilises a thermal imaging camera to detect people and larger animals and displays a colour highlighted warning indicator in the cockpit. If the optional new LED matrix headlights with 84 image points are selected, people beyond the visual range of the dipped beam headlight are also illuminated briefly if they are in the computed driving corridor, allowing the driver to react even faster.