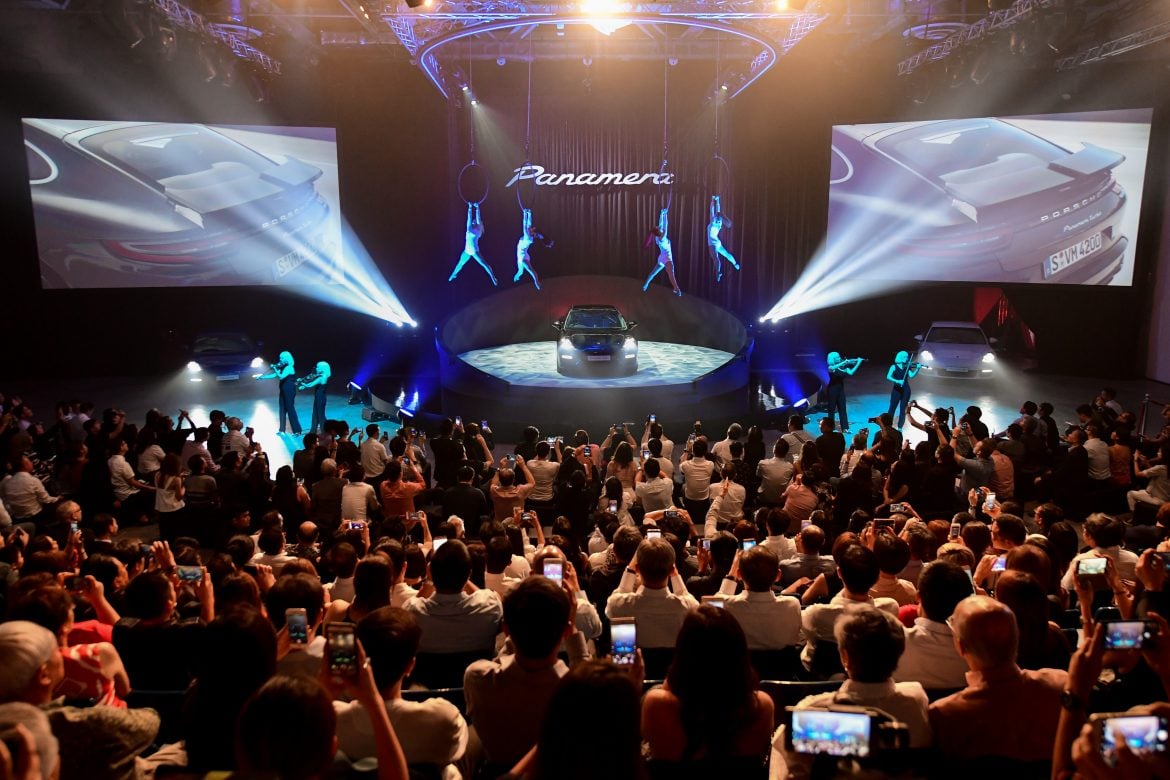 Redeveloped. Rethought. Realigned. More dynamic, sporty, and intense than ever before.

SINGAPORE, 22 March 2017 – Following a Sneak Preview of the Panamera Turbo in late 2016, Porsche officially introduced the second generation Panamera, Panamera 4S and Panamera Turbo at the “Symphony of Courage” event today. All three models are immediately available at the Porsche Centre Singapore showroom.

Held at Marina Bay Sands, the “Symphony of Courage” event showcased the courageous and innovative journey behind the creation of the Panamera, a car engineered to be the perfect blend of luxury and performance. Around 1,000 Porsche owners, enthusiasts, and members of the media were treated to an exhilarating unveiling of the new Panamera.

To set the stage for the grand reveal, all attendees entered via The Walk of Courage, a passageway corridor of light and sound. The Walk of Courage was designed to be enigmatic in its representations of acceleration, intensity, and ambiguity, and to invoke feelings of mysterious excitement, that tested their courage. Guests also enjoyed the Porsche Driver’s Selection and Porsche Design merchandise booths, took pictures at the ‘movie poster’ photo booths, and indulged in a fusion of European and Asian cuisine that further accentuated the theme of elegance that permeated that evening. When the time came, a spectacular show jointly conjured by renowned acrobatic artists and violinists brought to life the story of the Panamera through abstract imagery, music, vision and performance.

About the all-new Panamera
Systematically improved down to the very last detail, this new model is set to become a performance icon in the luxury saloon class. Its engines and transmissions have been developed from the ground up, its chassis perfected, and its interior redesigned for the future.

Visually, the design of the all-new Panamera is a reflection of the unique 911. The exterior silhouette is more expressive than ever with long, dynamic proportions, pronounced shoulder lines, and athletic flanks, as well as a roofline that is lowered by 20 mm at the rear, which is stylistically reminiscent of the 911, the design icon of Porsche.

Although not typical of sports cars, an abundance of luxurious space and comfort has become a staple in the Panamera model range. The interior of the all-new Panamera has been completely restyled while still retaining the Porsche DNA—with an ascending centre console and a flat and conspicuously wide dashboard. A future-oriented touch-screen display and new control concept called the Porsche Advanced Cockpit brings direct access to the most important functions.

A highly-innovative family of new V6 and V8 bi-turbo engines has been created for the all-new Panamera for a unique blend of efficiency and extraordinary performance. All engines in the range feature more power, but not at the expense of economy and emissions, which have been lowered.

Together with an all-new eight-speed dual-clutch transmission (PDK II) the engines are up to 16 percent more efficient. Power delivery is increased for a more rapid response, and driving performance and pleasure are intensified.

The entry-level Panamera has a new 243 kW (330 hp) V6 turbo petrol engine that is combined with rear-wheel drive. The new V6 turbo is a highly efficient and agile addition to the impressive range of engines. Power is up by 20 hp from the corresponding engine of the previous Panamera generation. At the same time, Porsche was able to reduce the combined fuel consumption of this completely redeveloped six-cylinder petrol engine from 8.5 l/100km to 7.6 l/100km.

The six-cylinder engine of the Panamera 4S has petrol direct-injection injectors that are positioned in the combustion chamber. This injector position offers optimal combustion, maximum efficiency, and very good engine response. The 4S and Turbo are also characterised by exceptionally fullbodied and authentic sound.

About the all-new Panamera Turbo
The top-of-the-line Panamera Turbo model features a new 4.0-litre twin-turbo V8 engine featuring twin-scroll turbochargers and VarioCam Plus that produces 30 hp more than the engine in the predecessor model despite a reduction in fuel consumption. With a power output of 550 hp and top speed of 306 km/h, the all-new Panamera Turbo is capable of completing the century sprint in a mere 3.6 seconds with Sport Chrono Package. Recognizable by its trapezoidal tailpipe trims, the Panamera Turbo has an extendable rear spoiler that is now finished in exterior paint colour and is integrated seamlessly into the boot. The wing also splits as it extends, thereby gaining additional surface area. These are impressive figures that illustrate just how easily the engine can propel the Panamera with its power-to-weight ratio of just 3.6 kg/hp. These extraordinary performance figures contrast with lower combined fuel consumption figures which, at 9.4 l/100 km, are 1.0 l/100 km less than that of the previous model. These figures equate to CO2 emissions of 214 g/km.

The Panamera Turbo is also the first Porsche to be equipped with the new adaptive cylinder control in its engine. In part-load operation, the system temporarily and imperceptibly turns the eight-cylinder into a four-cylinder engine. This reduces fuel consumption by up to 30 per cent, depending on power demand in the four-cylinder phases.

*Prices include a 5-year free maintenance and warranty program, market-specific equipment, GST and CEVS fees/rebates but exclude COE. It covers all servicing needs as well as maintenance and repair costs, including regular wear and tear. Prices are subjected to change without prior notice. Terms & conditions apply.